Students used their smartphones to cover a “press conference” for my Multimedia Tools class yesterday putting them in the forefront of a new trend in journalism.

The fake presser starred Pleasantville Police Chief Cliff Huxtable (ably played by SUNY Purchase Journalism Professor Ross Daly) who was announcing the arrest of a liquor store bandit. When the questions were done, he produced a mug shot, which students also had to copy with their phones.

END_OF_DOCUMENT_TOKEN_TO_BE_REPLACED 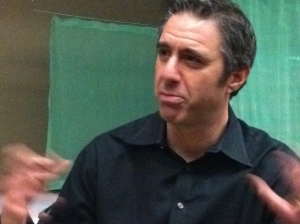 Alan Schwarz’s extraordinary series of more than 100 articles for The New York Times about the dangers of concussions in the N.F.L got him nominated for a Pulitzer Prize, prompted Congress to act, and revolutionized the thinking about sports-related head injuries.

On Wednesday, invited in by Journalism Professor Andrew Salomon, Schwarz gave a gripping talk to students gathered in the Humanities Theater describing in detail how he used his math background and comfort with statistics to prove a link between concussions and dementia.

A career baseball writer before he took on the N.F.L concussion story, Schwarz concluded the session by signing and selling his books.

January 22 is the deadline for New York Times Columnist Nick Kristoff’s Win-A-Trip 2012. This year he’s taking a college student on a humanitarian trip that will last up to two weeks. The instructions for how to enter are here. The Center for Global Development sponsors the trip and helps pick the winner. Here’s his video invitation for applications. It’s an amazing opportunity.

Fascinating look at new technological features the Times is trying out on its website LINK.