Students used their smartphones to cover a “press conference” for my Multimedia Tools class yesterday putting them in the forefront of a new trend in journalism.

The fake presser starred Pleasantville Police Chief Cliff Huxtable (ably played by SUNY Purchase Journalism Professor Ross Daly) who was announcing the arrest of a liquor store bandit. When the questions were done, he produced a mug shot, which students also had to copy with their phones.

The assignment required that the students cover the presser then create a multimedia package that included a 200 word story, a photograph and a video clip – all by deadline! 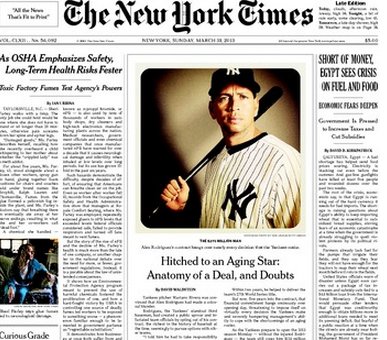 Portrait of ARod taken using an iPhone and Instagram on the front page of The New York Times March 31, 2013.

In 2010 the Times ran on its front page photographs of soldiers in Afghanistan taken by Damon Winter using an iPhone app called Hipstamatic.

Hurricane Sandy brought with it numerous opportunities for smartphone reporting. 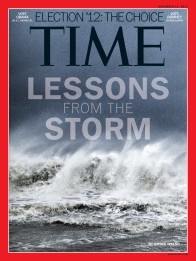 And TIME magazine sent out five reporters to chronicle the storm using their iPhones, yielding dramatic photos, one of which graced its front page.

As noted before on this blog, Gannett has given thousands of iPhones to its reporters to use as mobile workstations.

For student journalists the potential of the iPhone is fantastic. All but two of the students in my class already had their own iPhones. Of the two who didn’t, one used her own fancy red Nikon camcorder/camera and the other borrowed a Kodak Playtouch camcorder (which also takes still photos) from campus technology services.

There were a few technical glitches, but nothing out of the ordinary. And some  learned the hard way that it’s best to deal with the video first so that you can write your story while the video is uploading.

All in all it was a huge success. Smart phones. Smart students!