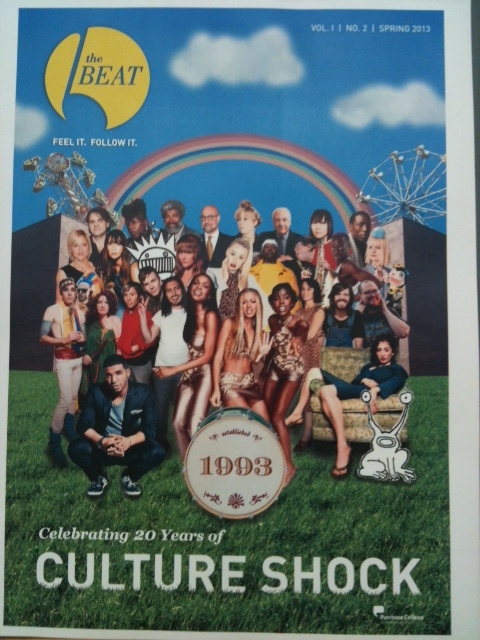 The second act is sometimes the toughest. So the challenge facing student staffers at The Beat this semester was to prove that Purchase College’s new music magazine was no one-hit-wonder.

When the second issue came out earlier this month with an eye-popping Culture Shock front cover, engrossing articles, and spectacular images, the message was clear: The Beat is here to stay.

What’s more, their winning formula of a high-quality student-generated arts and culture publication has inspired a similar publication at SUNY Binghamton, called Impact.

Stephen Brower, the publisher of the Binghamton Media Group, was visiting SUNY Purchase after The Beat’s first issue came out, saw the magazine and was prompted to finally act on an idea he’d been tossing around in his head for a while: to expand the arts section of The Free Press alternative campus newspaper that he oversees.

“Looking at The Beat, I saw there was a nice clean way to do it: Let students write about what they wanted, make it look good, and enforce the professionalism of it,” said Brower, a senior Literature/Computer Science double major at Binghamton, and a pal of Beat Managing Editor Rebecca Strassberg.

The grand poo-bah who created The Beat out of a music journalism class is Journalism Professor Andrew Salomon, who is beloved and admired by his students, and has set the high standard of professionalism that Brower sought to emulate.

But the real work behind this issue has come from Editor-In-Chief Christie Rotondo, Strassberg, and their growing team of student writers, designers, photographers and broadcasters.

In addition to the magazine, The Beat has expanded into something of a mini media empire, with a still-to-be-perfected website and an online TV show called The Beat Presents. Teamed with The Late Night Network, the show has been streaming online on Thursdays at 10 p.m. and is scheduled to last until the end of the semester. The show, hosted by Cyndi Harder and Scott Interrante, taps the talent of songwriters at Purchase College with interviews and live performances.

I watched the episode that featured Purchase country singer Mara Dominowski and was impressed by the professionalism of the entire show (not to mention the enviable talent of Dominowski). Watch it. It’ll make you Purchase proud.

“Between the magazine and the website and the TV show we have this arc of this great display of everything we can do,” said Strassberg.

I could not agree more. The Beat has tapped into the essence of what is so special about Purchase. I don’t know how we lasted so long without it.