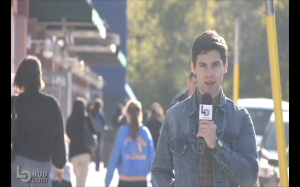 Christopher Vaughan, a Purchase journalism student, got his foot in the door at The Journal News and they liked him so much they gave him a job. He now has the lofty title of Social Media Coordinator – a job he maintains part-time while still taking classes. He monitors their Twitter, Facebook and Foursquare pages as well as doing some video.

Here’s how Chris tells it:

I currently work part-time as a Social Media Coordinator for the Lower Hudson Valley paper, The Journal News. The publication covers local events in Westchester, Rockland and Putnam counties and over the last decade, has cultivated a significant online presence with their LoHud brand.

I began interning for the paper in the summer of 2010 where I was a general reporter, meaning I wrote everything from a profile piece on a 90-year-old librarian to a towering blaze in White Plains. I gained experience-interviewing dozens of locals and accumulated numerous clips.

I planned to do the same the following summer but LoHud editors had something else in mind for me.

I was asked to come back and help with the paper’s online presence.  It was an unexpected offer but I sprang at the opportunity. And those predictions about the migration of journalism onto the Web solidified my decision. Throughout sunny season I aided with the upkeep of their Facebook, Twitter and Foursquare pages, as well as collaborated with my editor to jumpstart a Tumblr site. I would post interesting articles throughout the day and make sure our online forums were monitored.

I was also responsible for an “In the News” video segment and a print counterpart every week, where I traveled to various towns in Westchester and Rockland with my collaborator, videographer, Melissa Elian asking pedestrians a question relevant to local and national issues. My query and their responses (which greatly varied) would be recorded and put on the LoHud website.

But alas, another summer ended and so did my internship.

I was prepared to go back to school and begin my last year at SUNY Purchase but I still wanted contribute and continue boosting the paper’s social sites. I discussed a further position with my editors but there is a rule at Purchase, it is: you are not allowed to occupy the same internship twice. I discussed the situation with my editors and they proposed a tremendous opportunity. My editors offered me a part-time job. That is when my career started.