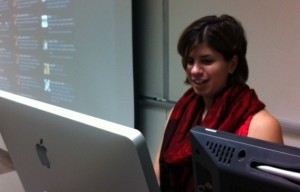 I learned SO much from my former student Jessie Biele (Class of 2008) today when she came to talk to my Multimedia Tools class about her new social media responsibilities at Patch.com.

She’s a self-described “social media junkie” – and it’s working for her. After editing Mount Vernon, V.A. Patch for two years, she got a bump up and now oversees social media for three Patch sites. Woohoo! So she’s on her iPhone and laptop  constantly using Twitter, Facebook and Pinterest to generate  reader interaction with the Patch sites. After all, the success of a social media editor is measured in Twitter followers, Facebook fans and reader comments.

We talked about using TweetDeck to time-release your Tweets, because even social media junkies must sleep from time to time. She swears by Linked In and old-fashioned business cards for job-hunting, and encouraged students to have a digital portfolio either on Tumblr or Weebly.

When she’s not working hard for Patch, Jessie’s also studying for her Master’s in Public Communication at American University. (She did confess that she still LOVES Purchase more, though. And was SOOOO happy to be back.)