Tom’s portfolio shows a breadth of ability, but he is best known for the flag-raising photograph he took during the aftermath of the attacks on the World Trade Center for The Bergen Record. The image was chosen by President Bush to grace a commemorative stamp which has raised more than $10 million for the families of 911.

The picture was a finalist for a Pulitzer Prize in 2002 and was named by Life magazine as one of the “100 Photographs that Changed the World.” Tom often gets asked why that image, out of all the images taken that day, emerged to symbolize the event. He said he believes it’s because, in part, so many horrific pictures were taken that illustrate the horror of that day, but his “Heroes” picture communicates a more positive, patriotic sensitivity. 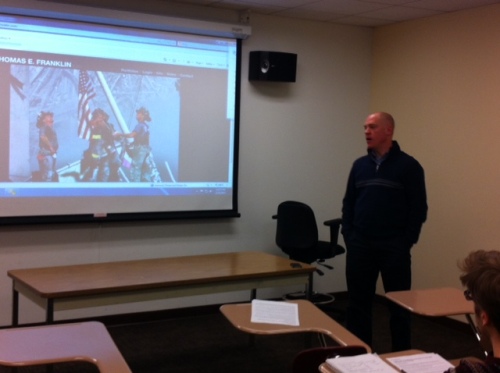 Tom visited Prof. Breen’s Journalism 2 class and my Journalism 1 class to talk about his work and take questions from students. He taught briefly in the journalism program at Purchase as an adjunct about a decade ago and now teaches photojournalism and visual storytelling at Ramapo College in New Jersey. He still works for The Bergen Record, taking photos and making videos for them.

Tom fondly recalled his days on campus, where he met his wife, Annemarie. She was Annemarie Rzodkiewicz back then, a graphic design major. She s now a production manager for Pearson Education. They have a son together and live in Bergen County, NJ.

Here’s Tom and Annemarie at graduation in 1988:

Here they are at Tom’s senior show. Gotta love the 80s! 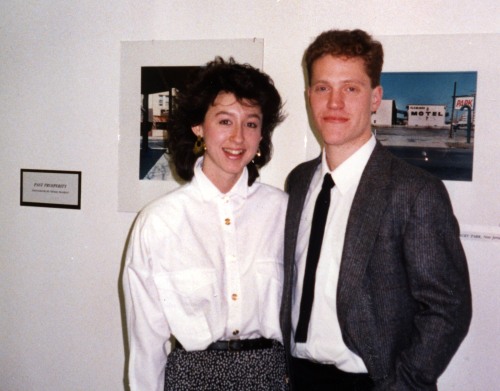 Tom’s covered a lot of sports as a photographer, but he was a bit of an athlete himself during his student days. Here’s a picture of  ‘Sudden Impact,’  which Tom describes as “a legendary” intramural softball team, 1987-88, taken in front of the athletic center. Tom’s second from left.

Here’s a picture of the SUNY Purchase basketball team (partial) from 1988. Tom’s number 20. 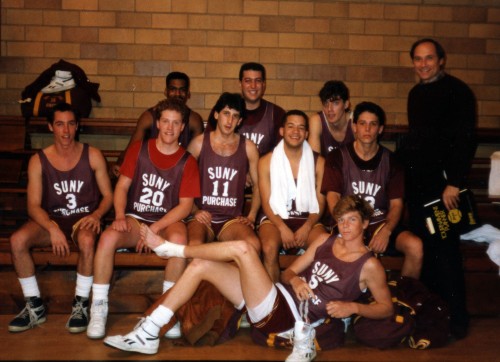 It was inspiring to have a Purchase alum of Tom E. Franklin’s caliber back on campus. Undoubtedly one of our Purchase Heroes.