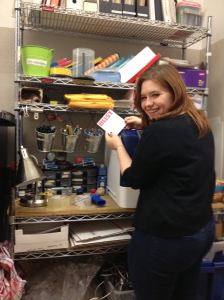 Brittany at work in the BUST offices

When SUNY Purchase Senior Brittany Houlihan started her internship at BUST magazine at the start of this semester she had no idea it would “result in a freelance piece, a credit in the masthead, over 30 blog posts, and a lot of experience.”

But last week she handed me a bright pink folder containing a copy of the magazine and printouts of her blog posts. As I was leafing through her clips, she proudly showed me the masthead of the magazine with her name in print. That never gets old, does it?!

The magazine bills itself as being: “For Women Who Have Something To Get Off Their Chests.” Brittany says it’s “Feminist. Crafty.” She’s been a fan of the magazine since she was introduced to it last year and approached them about an internship earlier this year. In June, she got a call from their internship co-ordinator calling her in for an interview. Soon, she was in their 27th Street offices in Manhattan blogging up a storm.

Her first post was about the first female NFL referee. Soon after, she blogged about a man who underwent simulated labor. She says, “I watched in amazement that by the end of the first day it was published, the post got close to 15,000 hits.  15,000 hits in one day?  I did that.  I was really proud of myself.  I never thought that was something I could accomplish. ” 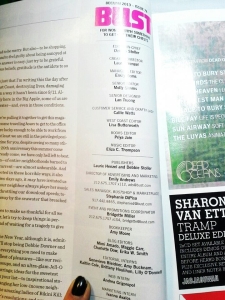 Brittany points to her name in the Masthead

There was some grunt work: schlepping clothes around and doing a few dishes. But by the end of her time at BUST Brittany says she had been published in the magazine and paid for it too! What’s more, she has established a connection with the editors there and hopes to continue writing for them next semester.

It’s nice to hear a senior feeling so optimistic: “I feel hopeful for my journalistic future, especially in magazine media.  I was doing a majority of web-based stuff, which I thought I would never enjoy.  But it is definitely a place I can see myself in life, and a semester before I graduate, that is some much-needed reassurance. “

One response to “Blogging for BUST”